AdGuard VPN is a VPN service created by our company. An in-house developed VPN protocol makes it unique among competitors. AdGuard VPN is available as a browser extension for Chrome, Firefox, and Edge, and as an app for Android, IOS, Mac and Windows. Both app and extensions have a free, basic plan and a paid subscription with more possibilities.

Some VPNs are too easy to detect which makes them vulnerable and unreliable. We took a long time to develop and deliberate over our own solution. The result was AdGuard VPN protocol, perfect for uncompromised security. It disguises itself as normal traffic, so it is much more difficult to track and block it. 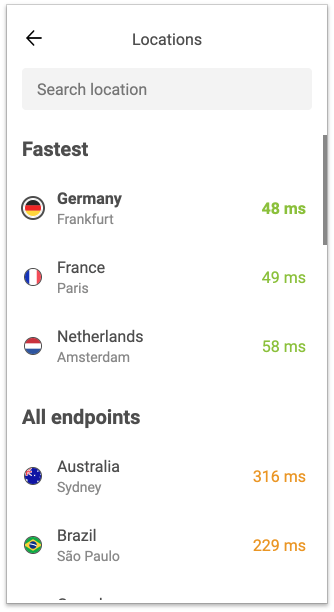 Among other things, VPN operating speed depends on the number of VPN servers and their bandwidth. AdGuard VPN has a plethora of servers with unlimited bandwidth dispersed worldwide. The closer a server is located to you, the faster the connection. The response time of each server is called a ping and is displayed right next to it. The top 3 fastest servers are highlighted in green, so it is very simple to pick the most optimal one.

As it was mentioned at the beginning of this article, there are two options: free and paid VPN. Free account allows to have:

Finally, AdGuard VPN subscriptions are integrated in AdGuard personal account. So, if you have it, AdGuard VPN will be present there, too. A common user account is very convenient: all purchases, license keys and subscriptions will be in the same place.

If you look at AdGuard VPN extension for Chrome or Firefox, you might find its menu rather minimalistic. There are four tabs, two modes of operation and seven DNS servers to select from. Let’s see how it all works. 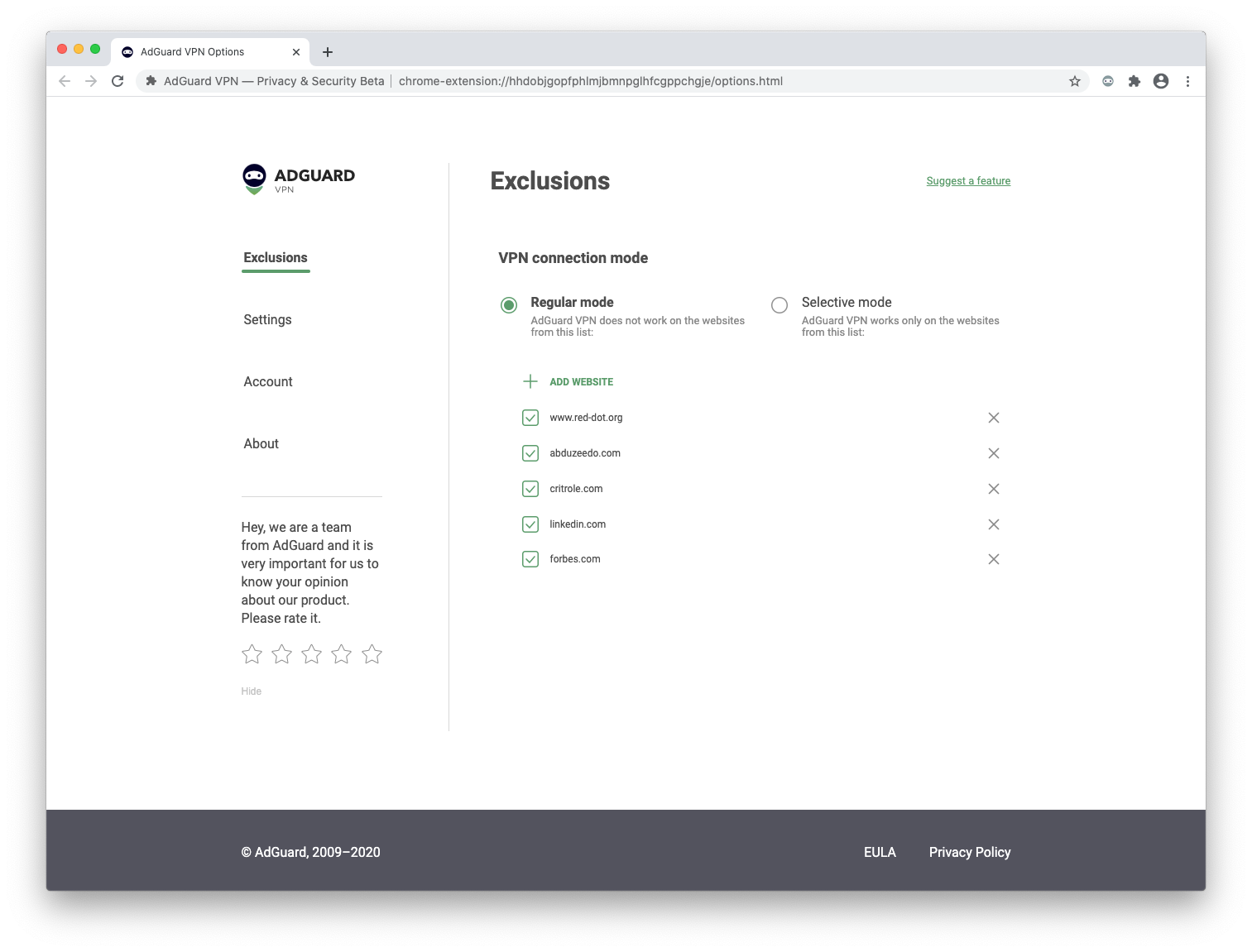 The second tab Settings features a function that blocks WebRTC – a program that allows third-party websites to ascertain user identity by detecting your real IP address. To prevent this from happening, we recommend to keep this function enabled.

7 DNS servers to choose from 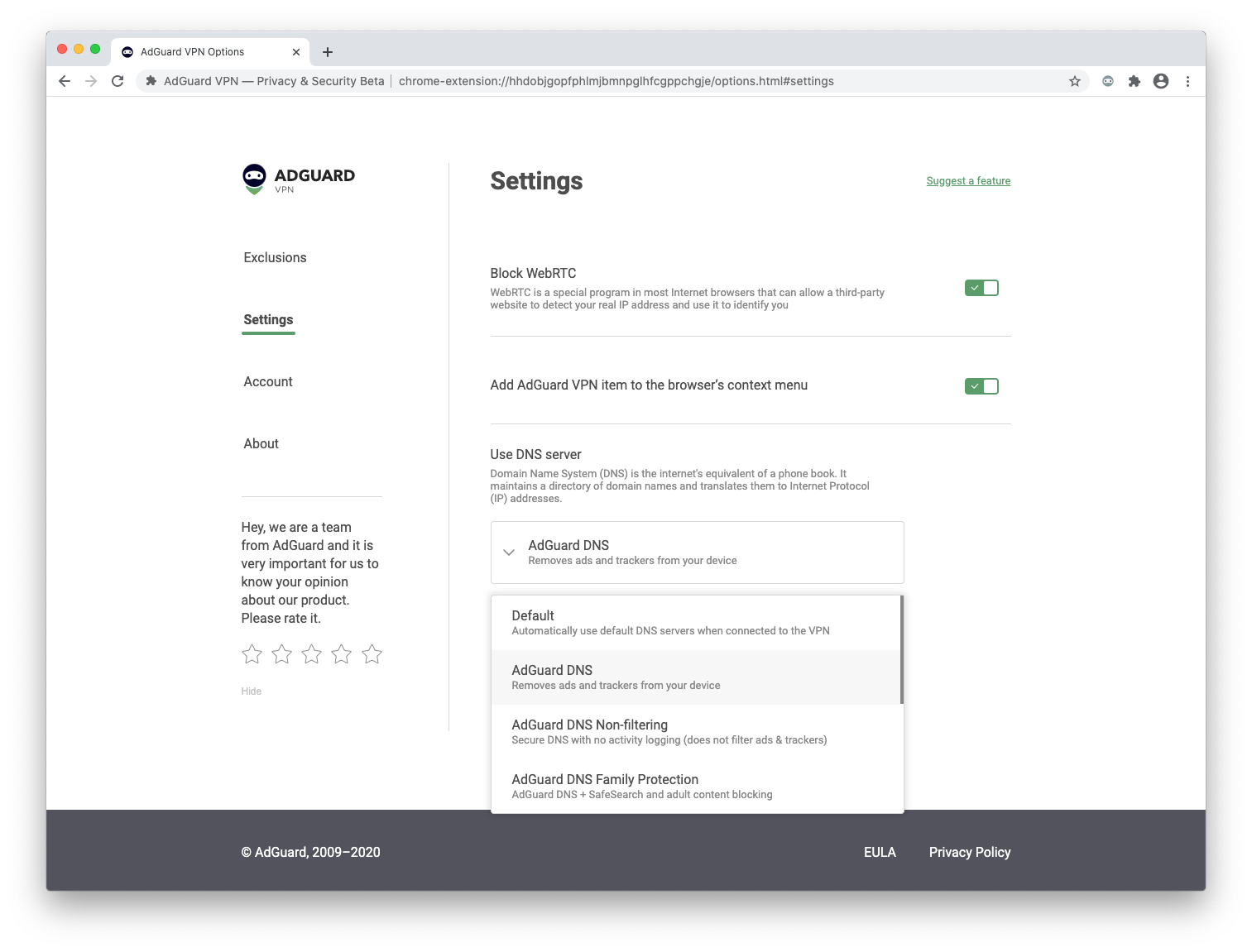 You can choose from several available DNS servers – by AdGuard, Google, Cloudflare, Cisco, or IBM (Quad9). Some of them remove ads and trackers from your device, others enable safe search and adult content blocking, still others protect your device from malware, phishing and spyware. It is not yet possible to add a custom DNS server in extension settings, but it can be done in AdGuard VPN for Android.

AdGuard offers a VPN app for Android. As all other versions of AdGuard VPN, it features multiple server locations. For each of them AdGuard displays its ping, and 3 fastest ones are always boosted to the top of the list for easy access.

AdGuard VPN for Android employs the same advanced AdGuard VPN protocol that our other VPN apps do.

By default, Regular operation mode is selected. In this mode, all requests are encrypted and routed through AdGuard VPN, except requests to websites that you manually add to the list of exclusions.

Vice versa, in Selective mode AdGuard VPN ignores all traffic and only works for requests to websites that you add to the allowlist. 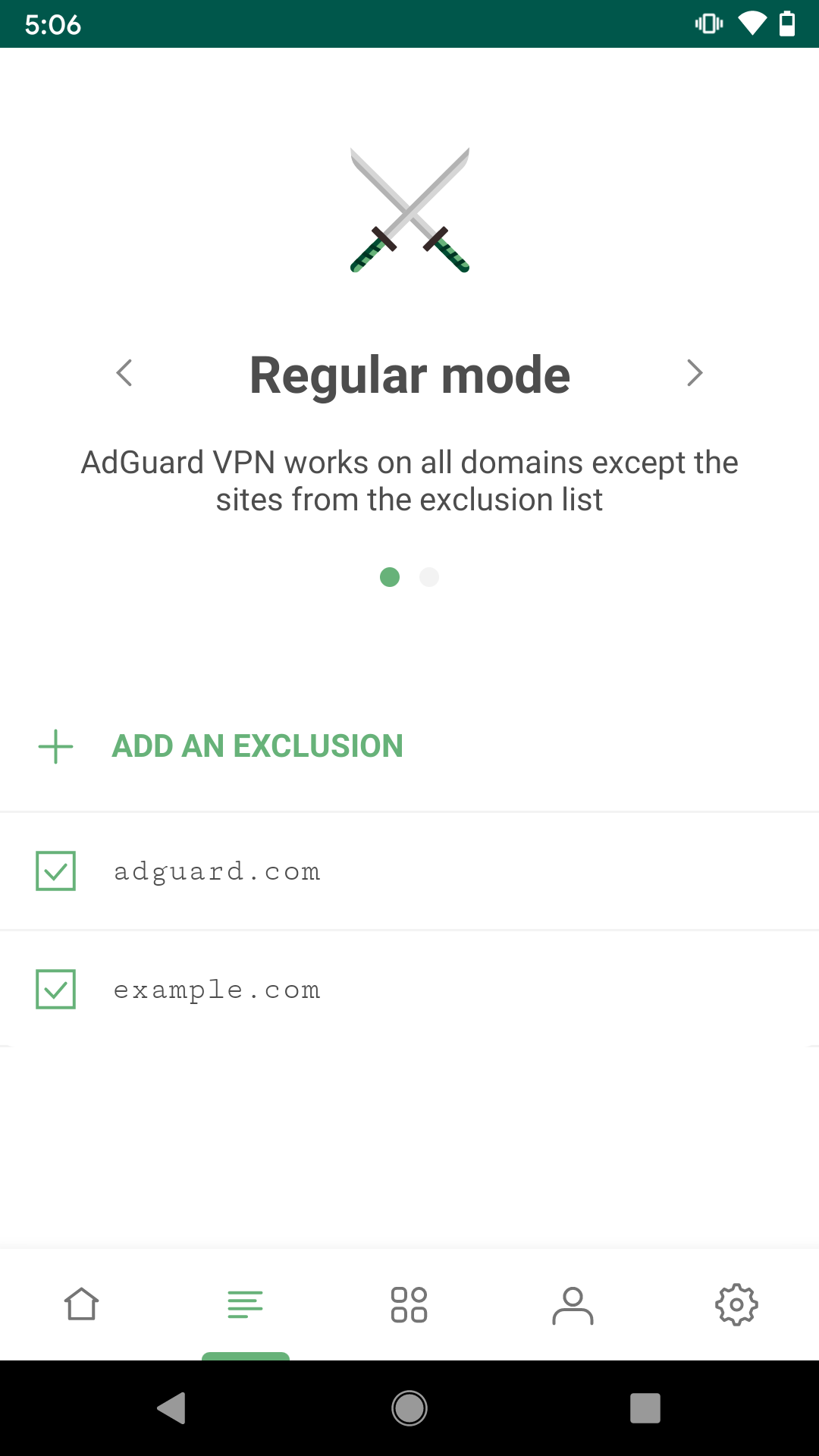 Exclusion lists for these two modes are separate, and you can switch between modes in one tap for maximum flexibility.

By tapping on the third icon in the bottom row, you can open Apps settings. All apps installed on your Android device will be listed there. 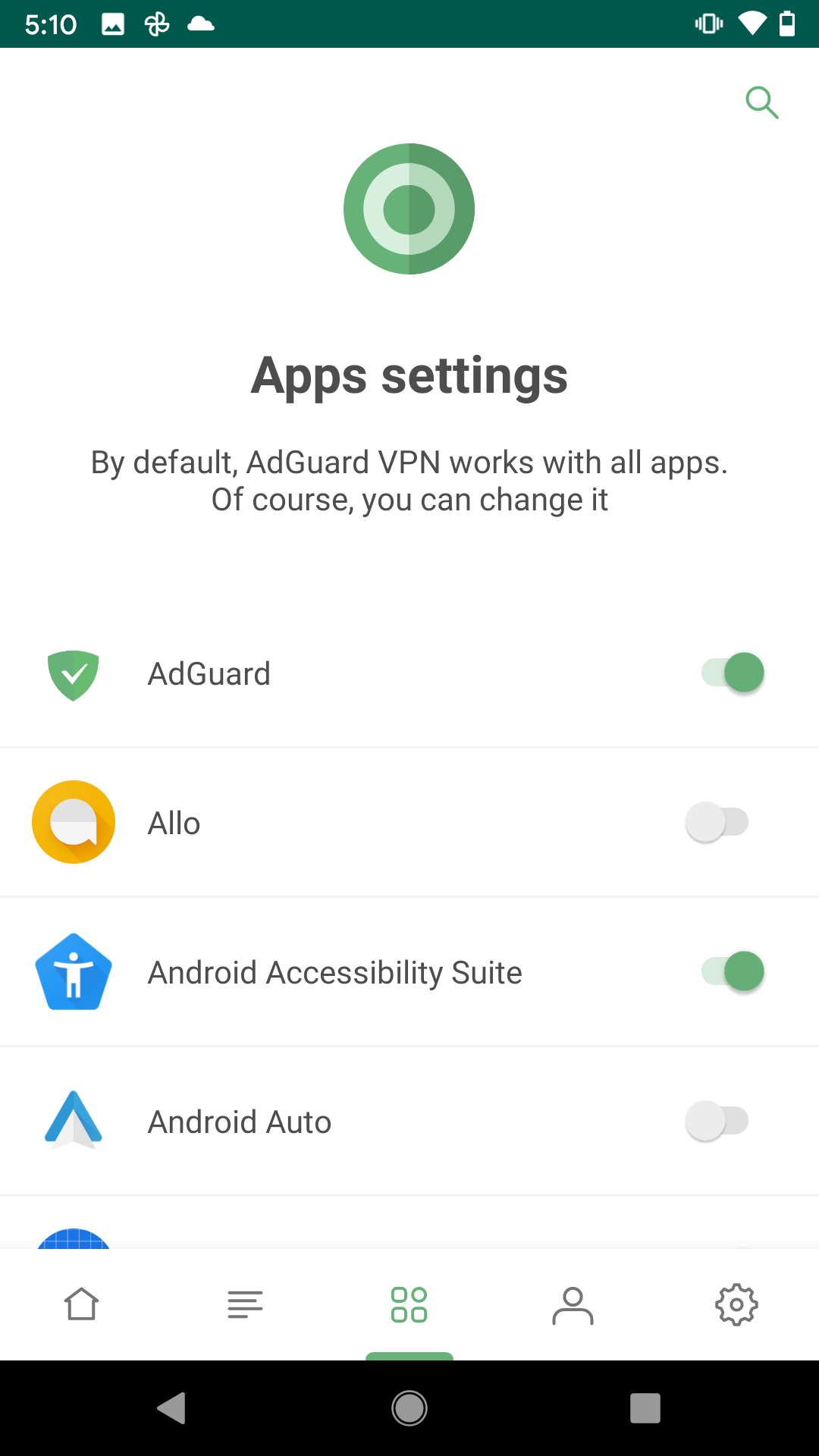 Turn off the switch next to any app to tell AdGuard VPN to ignore this app's traffic. By default, AdGuard VPN works with all apps.

If anonymity is absolutely essential for you, enable Kill Switch from the Settings tab. If connection drops for any reason, Kill Switch will block access to the Internet, thus preventing your anonymity from becoming compromised.

Inside Settings > Advanced Settings there's a VPN mode option. By default, AdGuard VPN for Android works as a regular VPN, but it can be switched to SOCKS5 mode. If you do that, AdGuard VPN will run a local proxy server which can be used by other apps to route their traffic through it.

We don't recommend using SOCKS5 mode unless you know what you're doing.

NOTE: SOCKS5 mode can be used as a temporary solution to run AdGuard VPN alongside AdGuard for Android ad blocker until we implement a proper solution.

Normally, two VPN-based apps can't work simultaneously on Android. But we made it possible for AdGuard VPN and AdGuard ad blocker. All you have to do is to install both applications on your device, AdGuard will do the rest automatically.

If you want to disable Compatibility mode, go to Settings > App settings > Advanced settings > Operating mode and select a different mode. This will unlink AdGuard VPN from the ad blocker app, and AdGuard ad blocker will stop protecting your device.

Normally, we strongly discourage from messing with Low level settings (located at Settings > Advanced settings > Low level settings) without consulting tech support. However, DNS servers option can prove useful to many users. It allows to indicate any custom DNS server that will be forced for all traffic coming through AdGuard VPN.

Various DNS servers can be used for different purposes: more security, higher speed, ad blocking, parental control etc. Some of the popular DNS providers, including AdGuard DNS, can be found in this Knowledge base article.