Sometimes you may notice that, according to Android built-in statistics, AdGuard consumes a lot of traffic and/or battery resource.

Both these problems are two sides of the same coin. Since in the process of filtering all the mobile traffic goes through AdGuard, Android decides that it is AdGuard that consumes it all. In reality, of course, it is not true.

Battery and traffic consumption shown in devices statistics do not represent the facts. The thing is, Android attributes all of the WiFi and Mobile traffic to AdGuard, which was in fact consumed by other apps. Due to this, AdGuards real share of total consumed traffic and battery resource increases, and the share of other apps, on the contrary, decreases.

To mitigate this misconception, we added a new screen called 'Battery usage'. You can access it by tapping on the battery icon in the top right corner of the main screen.

Inside you will find a chart that shows the AdGuard battery resource consumption within the last 24 hours, with an option to get more detailed hour-to-hour data by tapping on the dots on the chart. Besides that, there’s also a numeric breakdown of the relevant data and a short technical explanation.

On the screenshots below you can see the battery resource consumption statistics for a night and subsequent morning: 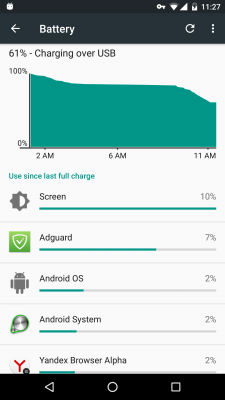 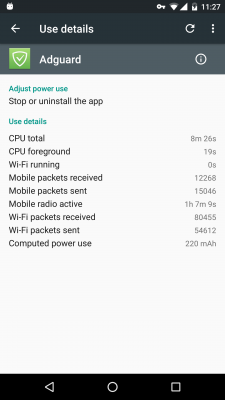 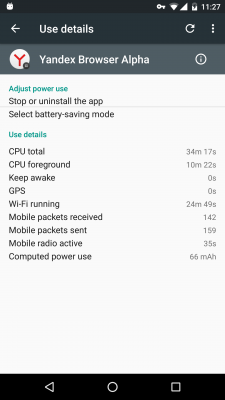 From these screenshots you can see that:

How much battery resource does AdGuard really consume?

First, let us lay down a little bit of theory and links with necessary data.

For example, from the table above:

Formulа to calculate the consumption:

Let's take CPU total from the second screenshot and convert into milliseconds: 506000

A coefficient cpu.active for 2GHz will be roughly equal to 225mA

Real consumption is several times less than it is shown in Android statistics. Instead of 220mAh it should be somewhere around 31-40mAh. On the other hand, browser's consumption should be not 66mAh, but ~200mAh.